Roy and I always say we should write down all the funnies and mishaps that happen to us with the kids. Boy do we have funny stories to tell. Christian is 5 so he can communicate well. He has always been an early talker (we’re seeing a difference with Ciara there who doesn’t talk as much). Yesterday, we went to the Sawgrass Mills Mall near our house to look for sneakers for my husband and son. They have a Nike Factory store and we’re always able to find nice sneakers for wayyy less than going to Footlocker or Footaction.

Roy and I trooped out with both kids after giving them dinner. I have to mention we were reluctant because my daughter was SUPER cranky. She was whiney and clingy – just wanted to be carried. Unfortunately, we knew we had to go that day because Roy has classes Wednesday, Thursday is Halloween then Friday he has classes again. We’re going to a wedding and wanted to get as much done as possible before the weekend.

My daughter was throwing herself all over the floor. Big ‘ol tantrum. We thought maybe she was teething(they are kicking her behind those teeth!) so I attempted to give her teething tablets. Nope, she was not having it and kept spitting it out. We ventured out anyway. 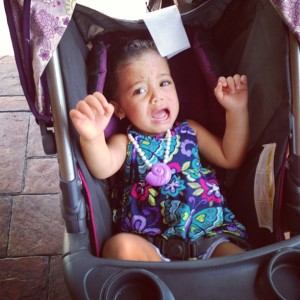 The minute we stepped into the Nike store my son was whining that he wanted gummy snacks in my daughters backpack. We told him he just had dinner and that is our emergency stash just in case his sister started acting up. She was being very good at the store but with any kid things can turn bad in 1.2 secs! My kid doesn’t like to hear he can’t have something so he continued to whine the.entire.time. Then, he started whining that he wanted pretzels. Of course, that continued throughout our stay. Ciara was being good until I tried on a pair of sneakers. She got cranky when I took off her shoes. She also wanted to play with the shoes that were on display so when we strolled her away – she had a fit. I’ve come to realize that I have “those” kids that you see in the mall kicking and screaming because they can’t get their way. Yup, those are my two bratty kids. Roy didn’t find any sneakers so we went to the checkout line and just got some Jordan’s for Christian and Ciara. Those checkout lines are wonderful for sticky hands like my son – there was a basket of balls. He needed a football because “it was small” and he didn’t have a small football. He only had a big football. We said no he didn’t need a football. After some back and forth arguments on why he needed a football we exited the store and walked to Rack Room Shoes. We passed – Wetzel pretzels, Cinnabon, Godiva, and those International candy kiosk places which he wanted something from every single one of them.

We get to Rack Room and Christian says his stomach hurts. We asked him why his stomach hurts. He says he doesn’t know so I proceed to tell him that it is a good idea he didn’t have the pretzels, cinnabon, or choclate as it would hurt his stomach more. He replied, “no it would make my stomach feel sweet”. Have I mentioned he has an answer for everything? He then started doing the “potty” dance so he tells my husband that he needs to go to the bathroom. (Have a also mentioned it never fails – he always has to go to the bathroom when we leave the house). Roy asks him what he needs to do, he replies with “poop”. Awesome. Roy storms out the store frustrated that he didn’t get to finish looking for sneakers. I strolled around waiting for them to get out. Ciara has been an angel the whole time. Yay! At least one kid is cooperating.

They were taking pretty long and I knew something happened. Roy comes out looking frustrated so I asked him what happened. He said, “ask your son”. I asked Christian but he gave me the silent treatment. I say, “hello, can someone tell me what happened?” Roy proceeds to tell me that Christian pooped himself – everywhere. He couldn’t hold it and had poop all over. He had to remove his underwear and clean him up all over the sink but wait it gets better while cleaning him he continued to poop – on the sink! Roy said he was crying and pooping in the bathroom stall which if anyone knows Roy he mummy wraps the toilet seat. He has to clean it before he allows Christian to use it. He said it was a disaster. He said he tried to be quiet but Christian kept crying and he kept talking to him to finish so he can clean him up. Let’s just say we were done at the mall. Christian was ashamed but we told him that he should’ve told us sooner to avoid having an accident. 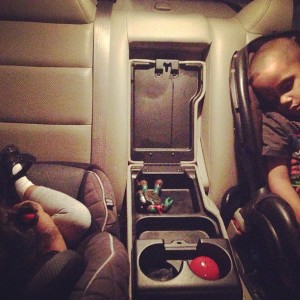 Next time, we’ll go with our instincts and stay home! Roy says for me to get ready because once Ciara is potty trained I’ll be experiencing the same issues! Lovely.

Please tell me I am not the only parent who has gone through a pooping accident in public?